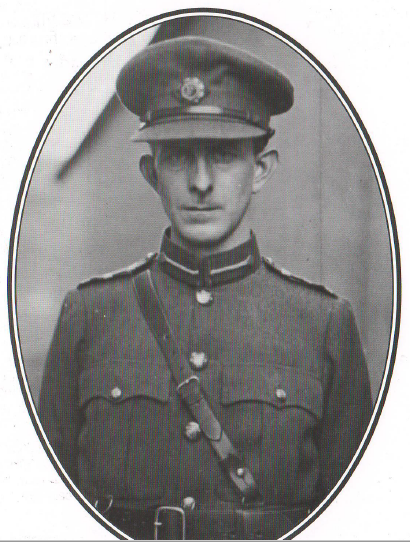 Richard Mulcahy (1886—1971) was born in Waterford. in his early childhood his family moved to Littleton Co. Tipperary where he attended the local national school. He received his further education at the C.B.S. in Thurles. His friendship with other local nationalists led him to join the Gaelic League and the Irish Volunteers shortly after their formation in 1913.

In 1916 he had graduated to a high position within the Volunteers. During Easter week he was second in command to Commandant Thomas Ashe, who had only recently been promoted prior to the Ashbourne action in Co. Meath.

MacNeill’s newspaper advertisement cancelling manoeuvres for Easter Sunday had reduced the number of volunteers available for active service severely. The Ashbourne action began rather hesitantly with the destruction of the nearby G.W.R. railway line on Easter Monday. The Ashbourne Volunteers carried out various arms raids and shooting at the local R.l.C. By Tuesday, the volunteersbegan to mobilise in earnest. However, continuous rainfall dampened their enthusiasm.

An odd and motley collection of weaponry was assembled, including rifles such as Lee Enfield, Mauser, Martini, along with shotguns, buckshot, pistols and a quantity of left over gelignite explosive. As the actions of the week progressed, it is worth noting what has been written about Mulcahy during this time — that he was “cool, clear headed and practical and with a personality and tact that enabled him virtually to control the situation without in any way undermining Ashe’s prestige as the commander” at Ashbourne.

By Easter Friday, the Ashbourne R.I.C. barracks had been surrounded by the Volunteers and the police were ready to surrender. However, a relieving force of police arrived by road, resulting in the barracks’ occupants withdrawing their offer of surrender. A fierce pitched gunfight ensued, with eight police killed and fifteen wounded. In  contrast, only two Volunteers were killed. At length, the police surrendered and were captured and disarmed.

The cool command and quick thinking of Mulcahy was decisive in this action. His experience at ashbourne was to prove of great benefit later in the War of Independence when he became chief of Staff of the IRA in 1919. Ashbourne could be seen as a forerunner of the later attacks on RIC barracks that would become common during that campaign. Mulcahy served as Minister of Defence in the Provisional government after the death of Collins in August  1922 and as leader of Fine Gael.