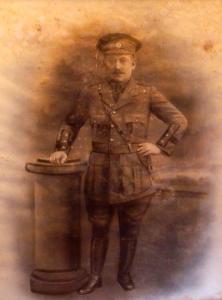 Phil Shanahan (1874-1931) was born in Foilmacduff, Hollyford, Co. Tipperary. He left Hollyford in the late 1905 to pursue a grocer‘s apprenticeship with the Murphy family at 25 Denzille St, Dublin. By September 1909, he had become the owner of a thriving pub/grocery shop at Foley’s Street, near Amiens Street station (now Connolly Station).

Phil joined the irish Volunteers in 1914 and was also a member of the lRB. He was on active service as part of the 2nd Battalion during the 1916 Rising in Jacobs’ Biscuit Factory underfellow Tipperary man Thomas MacDonagh’s leadership. Jacobs‘ factory was occupied as it had two main towers that overlooked nearby Portobello Barracks and other buildings in that part of the city. Volunteers were also posted in buildings on nearby Wexford Street, Camden Street and Aungier Street. The garrison’s main activity involved sniping at Portobello barracks. Jacobs’ factory was one of the last garrisons to surrender as the men did not receive the news of Pearse’s unconditional surrender note until the following day, Sunday, 30 April 1916.

Along with the rest of the battalion, Shanahan was arrested and marched to Richmond barracks. He was interned at Frongach, Wales where he became a close friend of Michael Collins. After his release from the camp in late 1916, Shanahan’s pub became a centre for republican activities. He provided shelter for Breen and Treacy after the Soloheadbeg Ambush in lanuary 1919.

Shanahan was nominated for Sinn Féin in the 1918 general election, taking his seat in the First Dail in January 1919. He took the anti—treaty side during the Civil War and died in November 1931.