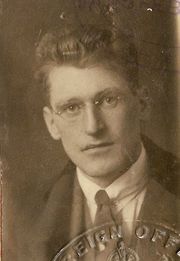 Ernie O’Malley (26 May 1897-25 March 1957) was an Irish Republican Army officer during the Irish War of Independence and the Irish Civil War and a Sinn Fein TD.

O’Malley was born in Castlebar, County Mayo, Ireland on 26 May 1897, coming from a lower-middle-class Catholic family. His family was conservative and nationalist, supporting the Irish Parliamentary Party. O’Malley was a medicine student at University College Dublin when the Easter Rising broke out in 1916, and he decided to ignore his unionist friends and join the Irish Volunteers during the uprising.

He became involved with Irish republican separatism in the years after the rising, and he concealed this fact from his family. O’Malley served as a training officer for the Irish Republican Army during the Irish War of Independence, and he was captured and tortured by the British at Dublin Castle in 1921.

O’Malley opposed the Anglo-Irish Treaty, and he became Assistant Chief-of-Staff of the IRA during the Irish Civil War, taking part in the Four Courts siege during the Battle of Dublin. On 4 November 1922, he was captured by the Irish National Army after a shootout, surviving twenty bullet wounds that would remain lodged in him for the rest of his life. In 1923, he was elected to the Dail Eireann as a TD from Dublin North, representing the Sinn Fein party. In 1927, he did not contest the new election, and he spent many years of his life in the United States and Mexico with several artistic communities.