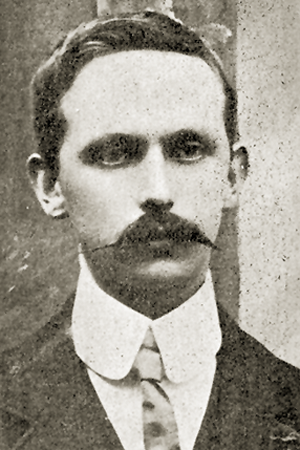 Although Éeamonn Ceannt (1881-1916) was born in Ballymoe, Co. Galway, his mother Joanne was from Co. Tipperary. His father, James Kent was an RIC officer who served in Galway and Louth.

Éamonn Ceannt joined the Gaelic League in 1899, eventually becoming a member of its governing body. He was a noted uileann piper and founded the Dublin Piper’ Club in 1910. He worked as an accountant with Dublin Corporation from 1901-1916.

By 1912, Ceannt had been sworn into the IRB by Séan  MacDiarmada and had risen to become a member of the I.R.B.’s supreme Council. He was a founding member of the Irish Volunteers in 1913 and also participated in the 1914 Howth gun-running.

Ceannt was one of the seven signatories of the Irish Proclamtion during the 1916 Rising. He was commandant of about 100 men of the 4th Battlion of the Dublin Brigade who were station at the South Dublin Union, controlling the area around Dolphins’s Barn. his men saw intense fighting during the Rising. Ceannt was sentenced to death for his part in the Rising. He was executed by firing squad in Kilmainham Gaol on 8 May 1916.