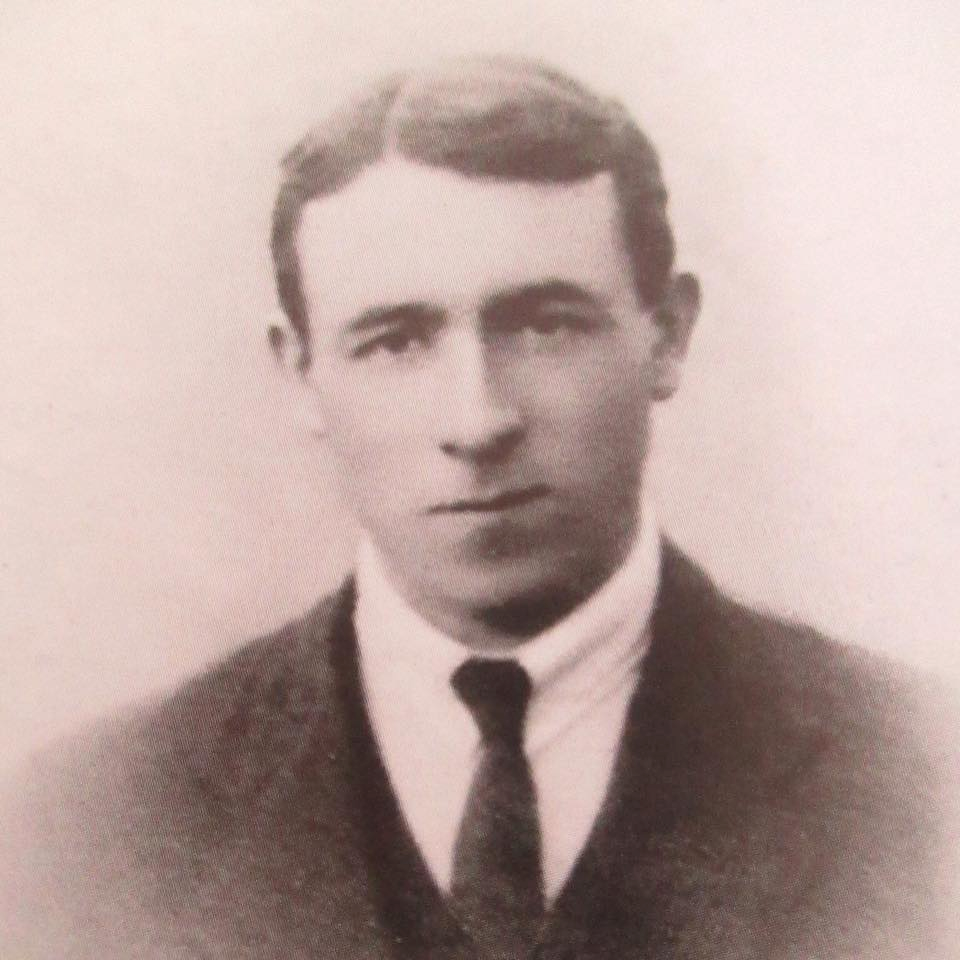 Dinny Lacey (31st May 1889-18th Feb 1923) was an Old IRA officer during the War of Independence and an Anti-Treaty officer during the Civil War. He was born in Attybrick, near Annacarty in Tipperary to a very republican family. He was deeply religious and a strict non-smoker and non-drinker.

He joined the Irish Volunteers in 1913 and was sworn into the Irish Republican Brotherhood (IRB) in 1914. In September 1920, during the War of Independence, he was selected to lead the 1st Flying Column of the 3rd Tipperary Brigade. They successfully ambushed 6 British soldiers in Thomastown and 4 RIC men at Lisnagaul in the Glen of Aherlow and killing them all.

In 1921 they ambushed British soldiers near Clogheen, they captured an RIC Inspector called Gilbert Potter. Lacey later executed him in reprisal of the British execution of Thomas Traynor in Mountjoy Prison. In December 1921 his unit was split over the Anglo-Irish Treaty which he strongly opposed and most of his men followed suit with him. He was then appointed to command the 3rd Tipperary Brigade during the Civil War.

On the 18th February, he and his men were on a peace mission meeting members of the Neutral ex-Officers of the IRA in Ballydavid in the Glen of Aherlow when 1,000 Free State troops surrounded the farm in which they were staying. Lacey and his comrades held out in the farmhouse under fire for hours until they finally decided to try escape and managed to get out the door and dashed for the fields beside the farm.

They reached the end of a field and got to a river which they couldn’t cross as it was too deep so they turned back and decided to jump a high ditch to get into the field beside them. Lacey’s comrade helped him climb up and while climbing Lacey’s gun fell to the other side and as he jumped to the other side of the ditch he heard the words; “hands up!”, Free State troops had their sights set on him and he instantly picked up his gun and fired his last shots.

The Free Staters fired and Lacey died instantly with a bullet to the head. He died for the republic that he swore allegiance to and would not settle for anything less than full independence for the whole island and was shot by his own fellow Irishmen who betrayed him and the republic they once swore allegiance to. He was also a very courageous and daring man and one of his friends, Seán Fitzpatrick, who had been his adjutant in the Brigade’s No.1 Flying Column wrote of him: “So passed Dinny Lacey – a great fighter and leader of men.

Possessed of magnificent courage, daring to the point of rashness, outspoken and determined, yet deeply religious – he was admired by his men and feared by his enemies”. During the action at Longford Pass one of the volunteers recorded: “Climbing over the wall, he(Lacey) came out on the road in full view, walking up and down with hands in pockets and laughing as bullets whistled around him”. Another volunteer also testified likewise saying: “Two things I remember well. One was Dinny Lacey strolling up and down the road with his hands in his pockets….. while the road was swept with bullets”. God Save Ireland!

“It was England gave the orders and England gave the guns,
And Collins dyed the khaki green to kill our gallant sons,
They spilt their blood upon the grass and thought it no disgrace,
When they murdered Dinny Lacey the noblest of our race”.

Of all the young men who put Irish freedom before everything else in the second decade of this century, Dinny Lacey will always be in the forefront.
He was a man of strong Christian faith who never asked a fellow volunteer to do anything he was not prepared to do himself. His critics would always accept his deep sincerity, his exceptional bravery, his integrity and though a stringent disciplinarian no one ever questioned his standards in seeing that fair play and justice was given to friend and foe.

As a military leader he commanded full respect from his Flying Column. He never sought the limelight and preferred a low profile. Affirmative in manner and firm in his convictions, his Column was the best disciplined fighting unit in the Irish Republican Army. His death in the tragic Civil War shocked the soldiers of both sides into realising the folly and tragedy of such conflict.