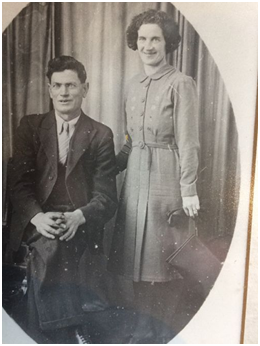 Dan O’Keeffe was born in Glenough, Rossmore to a family already steeped in the Nationalist tradition. He became active in the Volunteers after the Rising and was described by Eamon O’Duibhir as being “… a gallant and fearless soldier, in private life he was ever gentle, cultured and friendly…. He was a member of the 3rd Battalion of the Third Tipperary Brigade. Dan is listed in the Fitzpatrick papers as having been the Intelligence Officer at one point for the 3rd Battalion.

He was among those who lay in wait at Sologoheadbeg in the days before the ambush but was not present on the day. He did, however, take part in the transportation and concealment of the gelignite in the days after the ambush. He was also present on the raid on Molloy’s yard in Thurles for gelignite.

The O’Keeffe house in Glenough was a safe house for those on the run and regularly hosted battalion meetings. Breen, Treacy, Robinson, Hogan and Ernie O’Malley were regular visitors to the house. The big four were staying in Glenough on the night that Sean Hogan was captured and the initial plans for his rescue were formulated in the kitchen of the O’Keeffe house. Dan Breen recorded in a newspaper article in later years that, “Hurriedly, we decided on a course of action and made our preparations. Ned Reilly and the O’Keeffe brothers gave us every help in laying our plans…”

Dan was a member of Dinny Lacey’s flying column and is mentioned as being present at the Thomastown Ambush. He was situated on the opposite side of the road from the main ambush party with one of his comrades and came under heavy fire. One of the main ambush party came out in the open and provided a covering fire allowing him and his comrade to escape unharmed. The details are recorded in “With the IRA in the Fight for Freedom: 1919 to the Truce”.

Dan along with several of his comrades was sent back to their Battalion area to carry on the fight as part of an Active Service Unit. There, they continued to harry and engage the enemy forces wherever they encountered them.

Dan was arrested in Kingsbridge railway station (Hueston) in March 1921 and was brought to Dublin Castle. Here he found himself in a cell with CS (Todd) Andrews. In his autobiography, Andrews details how they spent several days in the cell together before being transferred to Arbour Hill prison. After some time here they were transferred to the Rath camp in Kildare. Dan was to be interned here without charge for the duration of the War of Independence.

Dan took the Republican side in the Civil War and was part of the contingent of the IRA who were based in the barracks in Clonmel after its evacuation by the British. He was one of a group of volunteers from Tipperary sent to aid Cathal Brugha in the defence of the Block in O’Connell St in 1922. Dan, along with his neighbour Ned Reilly from Coolanga, was among the final rear-guard to leave Brugha in the Hamman Hotel. They held out until July 5th 1922 when, with the building on fire around them, Brugha directed these last five men to surrender, before emerging from the burning building and being shot down by the Free State troops. Kathleen Barry (Sister to Kevin Barry) present in the Hammam hotel with Cumann na mBan, wrote to her fiancé who disapproved of her actions in the Hammam, “And you can ask Jack O’Meara or Ned Reilly or Dan Keeffe if we hindered the fight or kept them from holding out as long as they would otherwise have done. They were great – they were sports and let me do heaps of things”. Dan was interned in the Curragh during the Civil War as was his brother Con.

The O’Keeffe family were to pay a high price for their active service during the conflict. The family home was blown up by British Forces in an officially sanctioned reprisal for the IRA’s execution of District Inspector Gilbert Potter. The official notice, signed by Colonel Commandant Cameron of the 16th Infantry Brigade and Military Governor, stated that the reprisals were aimed at “…active supporters of armed rebels and especially of the 3rd Tipperary Brigade of the Irish Republican Army”. On the 14th May 1921, military lorries and soldiers arrived at Glenough, ordered the family out of the house and blew it up.

Dan’s father, writing to his brother , described it thus,

Of course it was a great consolation to us that they didn’t catch any of the young fellows about the place. They would shoot them like dogs. They beat Con unconscious at a big “roundup” they had in Hollyford. They have Dan in prison for the last six months without charge or trial. They arrested Patrick for deportation to America and kept him four months in solitary confinement in an English prison. They wouldn’t leave him at home and they wouldn’t let him over to America fearing he would tell too much….

…we are not fretting over what happened to us. There is many a poor father and mother had to make greater sacrifices when they had to look on as their sons were shot in their beds or taken out of their beds naked and shot on the road like dogs…

…it was the greatest fight in Ireland’s history and why shouldn’t we share in it as well as another but I can tell you there is lots of people who want to keep out of the fight but who would try to grab the gains when the time would come.”

Of the O’Keeffe family, Dan, Con and Joseph all saw active service in both the War of Independence and the Civil War, and all were imprisoned at some stage or other. Their brother Patrick had arrived home from America in 1916. He was arrested, along with several other locals for giving his name in Irish. He served a month in Limerick prison, and on release he and his comrades were welcomed home by cheering crowds and a bonfire in their honour. Patrick went on to organise for Sinn Fein in the locality before being arrested and deported back to America for seditious activities in 1918.

Their sister Nora also returned from America in 1919. She too was to play an active part in the struggle for Irish freedom. She worked as a secretary to the Labour leader in Liberty Hall in Dublin. She was heavily involved in Cumann na mBan at a national level, serving as an organiser. It was Nora who, on hearing of the death of Sean Treacy, went to the Royal Hospital Kilmainham and claimed his body. She preserved a lock of his hair. She observed that the British soldiers paid great respect to Treacy’s remains and treated him with the dignity befitting a fallen soldier. Nora also was involved in the printing of Republican newspapers and was imprisoned during the Civil War in Kilmainham.

Sarah, Helena, Bridget and Mary Catherine O’Keeffe were all active in Cumann na mBan at this period. It was Bridget O’Keeffe whom Sean Hogan was escorting to the dance in Meagher’s of Annfield (cousins of the O’Keeffes) when he was captured.