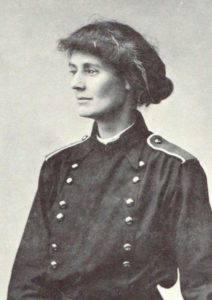 Constance Georgine Markievicz, known as Countess Markievicz (4 February 1868 – 15 July 1927) was an Irish Sinn Féin and Fianna Fáil politician, revolutionary nationalist, suffragette and socialist. A founder member of Fianna Éireann, Cumann na mBan and the Irish Citizen Army, she took part in the Easter Rising in 1916, when Irish republicans attempted to end British rule and establish an Irish Republic. She was sentenced to death but this was reduced on the grounds of her sex. On 28 December 1918, she was the first woman elected to the British House of Commons, though she did not take her seat and, along with the other Sinn Féin TDs, formed the first Dáil Éireann. She was also the first woman in the world to hold a cabinet position (Minister for Labour of the Irish Republic, 1919–1922).

In the Rising, Markievicz fought in St Stephen’s Green, where on the first morning—according to one account—she shot a member of the (unarmed) Dublin Metropolitan Police, who subsequently died of his injuries. Other accounts place her at City Hall when the policeman was shot, only arriving at Stephen’s Green later. It was long thought that she was second in command to Michael Mallin, but in fact it was Christopher “Kit” Poole who held that position. Markievicz supervised the setting-up of barricades on Easter Monday and was in the middle of the fighting all around Stephen’s Green, wounding a British army sniper. Trenches were dug in the Green, sheltered by the front gate; however, after British machine gun and rifle fire from the rooftops of tall buildings on the north side of the Green including the Shelbourne Hotel, the Citizen Army troops withdrew to the Royal College of Surgeons on the west side of the Green.

The Stephen’s Green garrison held out for six days, ending the engagement when the British brought them a copy of Pearse’s surrender order. The English officer, Captain (later Major) de Courcy Wheeler, who accepted their surrender was married to Markievicz’s first cousin.

They were taken to Dublin Castle and Markievicz was transported to Kilmainham Gaol. They were jeered by the crowds as they walked through the streets of Dublin. There, she was the only one of 70 women prisoners who was put into solitary confinement. At her court martial on 4 May 1916, Markievicz pleaded not guilty to “taking part in an armed rebellion…for the purpose of assisting the enemy,” but pleaded guilty to having attempted “to cause disaffection among the civil population of His Majesty”.  Markievicz told the court, “I went out to fight for Ireland’s freedom and it does not matter what happens to me. I did what I thought was right and I stand by it.” She was sentenced to death, but the court recommended mercy “solely and only on account of her sex”. The sentence was commuted to life in prison. When told of this, she said to her captors, “I do wish your lot had the decency to shoot me”.

Markievicz was transferred to Mountjoy Prison and then to Aylesbury Prison in England in July 1916. She was released from prison in 1917, along with others involved in the Rising, as the government in London granted a general amnesty for those who had participated in it. It was around this time that Markievicz, born into the Church of Ireland, converted to Catholicism.